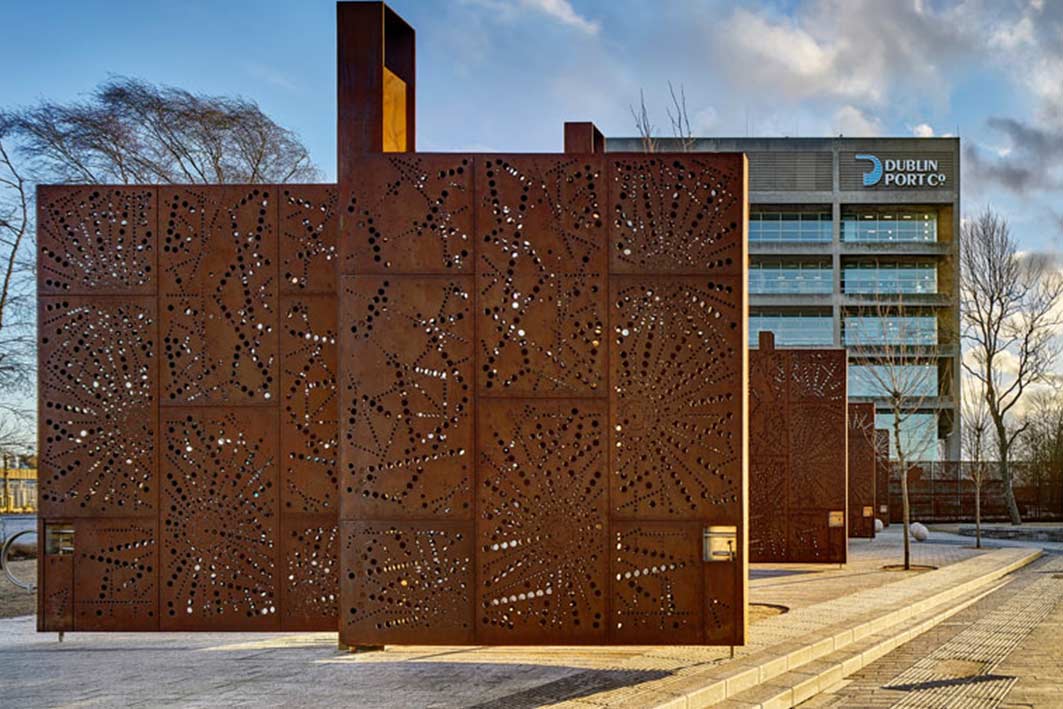 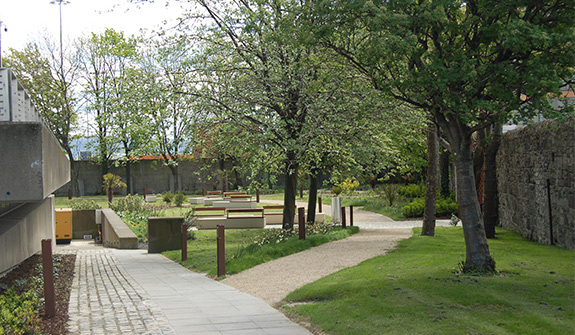 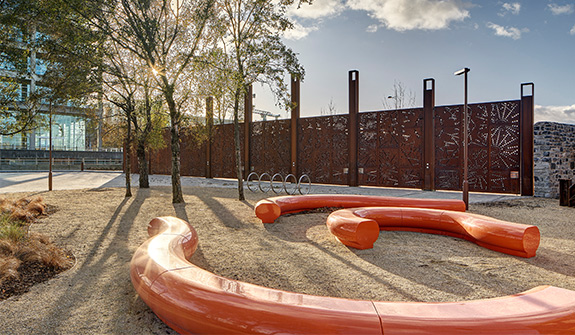 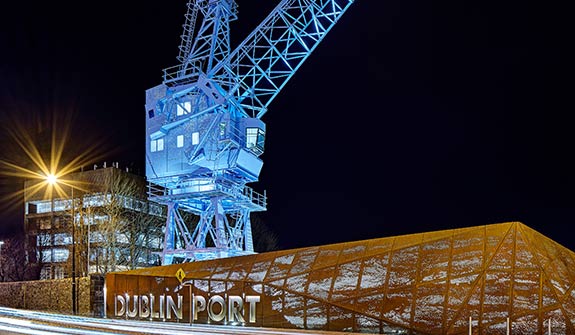 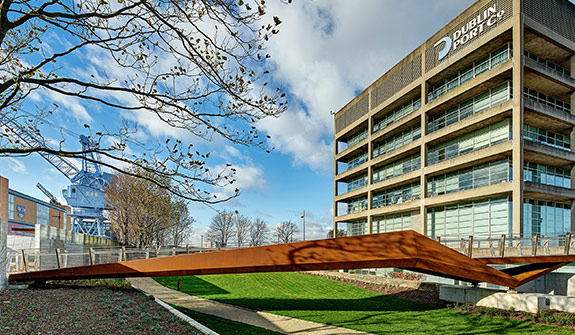 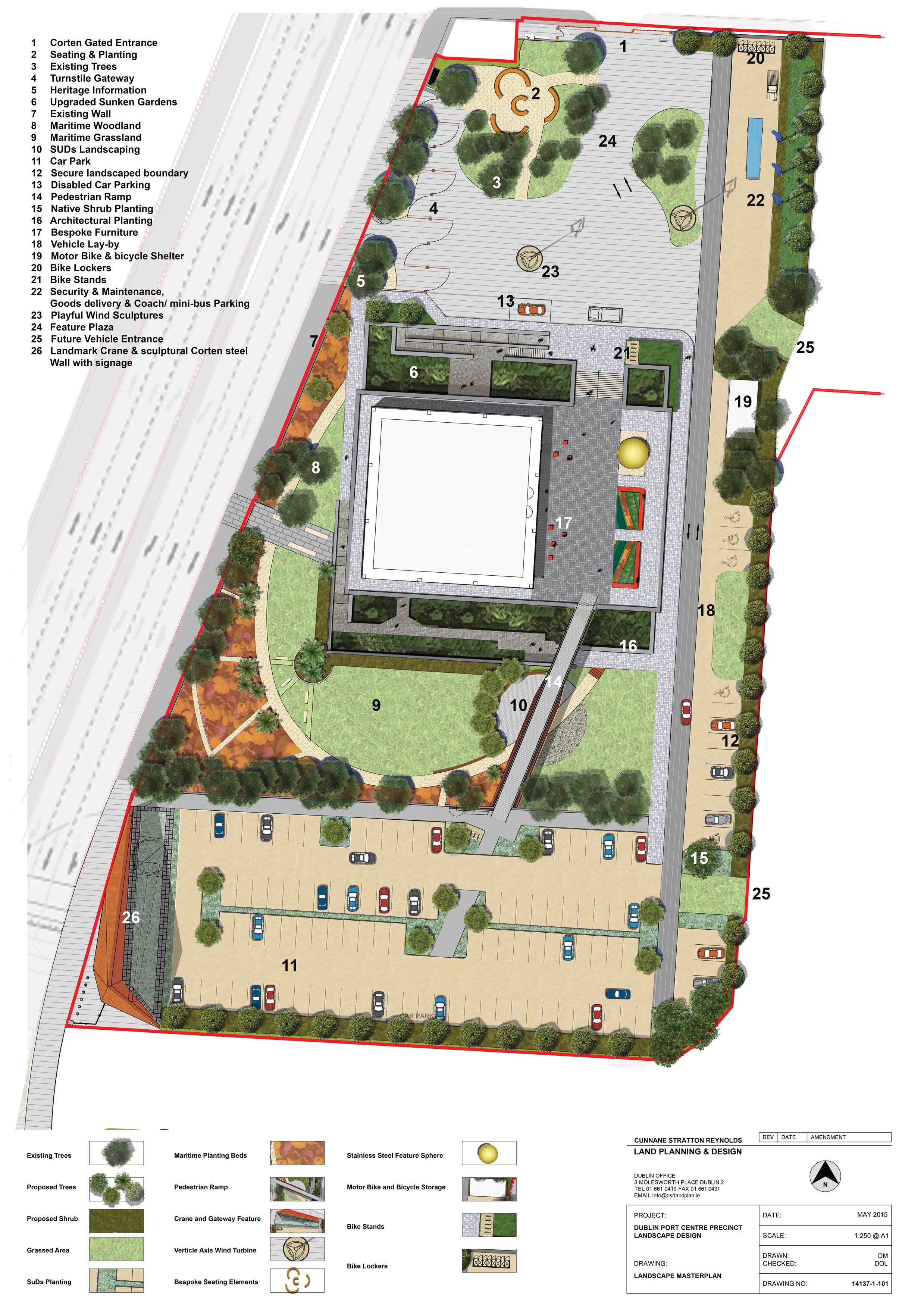 Opening up of the Port Centre — Precinct Improvement Project

BACKGROUND
The project involves the opening up and enhancement of the environs of The Port Centre HQ building on East Wall Road, in accordance with Dublin Port Companies “Soft Values” initiative. The project brief also required the addressing of a number of practical objectives in terms of site reorganisation, parking, and access.

CONCEPT
The Port Authority originally shared offices in central Dublin with the Ballast Office, in a building, now demolished, on the corner of Westmoreland Street and O’Connell Bridge. The building and its function was an integral and important part of Dublin Civic life, its timekeeping functions, through the raising and lowering of the time ball on the roof, essential to navigation and a feature of city life.

In addressing the soft values aims of the client the design team approach is to reintroduce, physically and visually, the Port and its HQ building back to mainstream Dublin life – to recreate a contemporary and much loved and familiar place or feature at the interface of the city and the Port on East Wall Road. The approach to the scheme involves the creation of a number of distinct spaces as follows:

The Turnstiles Plaza: a new stone paved plaza to the north of the building with feature gates/turnstiles in corten, steel allowing controlled access.

The Podium and Sculptural Ball: The scheme creates a welcoming place for both users and visitors alike on the existing elevated Podium entrance to the building. A significant sculptural element inspired by the original Port “Timeball” on Westmoreland Street is set here in stainless steel, reflecting the wider port activities. Large seating planters provide further interest.

Walled Maritime Garden: The existing walls in stone and distressed concrete have been retained as the enclosure to a new hidden garden with a maritime or coastal theme. The shelter provides a pleasant environment and facilitates the use of some unusual and exotic planting — palms, tree ferns, acacia, olives — as well as more traditional and native plants, creating a unique coastal garden in the city.

Sculptural Ramp: A lightweight “Gangplank” provides an undiscriminating connection between the new car park and the existing elevated podium. This elegant construct spans seamlessly through and over the walled garden, creating a dynamic and complementary feature.

The new spaces provide an amenity for events or relaxation in an area of the city lacking in such spaces. The project contains a substantial amount of new trees and native shrubs, to enhance habitat, provide shelter and green the location, as well as a SUDS drainage system designed as feature areas within the landscape. The project cost in excess of €6M and was completed on site in October 2017, opened by An Taoiseach Leo Varadker and Lord Mayor/Ardmhéara Mícheál MacDonncha.